Have you read David Nicholls's One Day yet? I raved about it last fall, and so as always I approach the release of a film based on the novel with both suspicion and excitement. Perhaps a titch more excitement given Nicholls penned the script, but then a titch more suspicion when I hear Anne Hathaway's British accent. (Even if hers is better than my attempts to sound like Eliza Doolittle-meets Cher Lloyd-meets a Dickensian-era newspaper boy.)

Anyway, if you don't want to have anything about the story of Dexter and Emma ruined for you (and you've missed the trailer, which reveals much -- though not all -- of the tale), then don't follow these links.

If, however, you have read the book, or have already seen the trailer and have long lost any faith in Hollywood's ability to produce two minutes of film clips without simply compressing the storyline, then I urge you to read this snarky, perfect review of the trailer. That's right. Review of the trailer. It's what we've come to in a society obsessed with brevity.

And then, if you're leaning more towards excitement than suspicion for this movie, and again you're not too worried about spoilers, check out this featurette with still more clips.
Posted by Trish at 02:41 No comments:

"famous for the wrong book"?

I love this discussion of how authors are often famous for the wrong book -- Guardian writer John Self points to such classics as Remains of the Day or Catch-22 as not-bests.

I'm hesitant. I feel like often enough, the famous books are most famous for their ability to transcend elitist or snobby particularities. For example, my favourite Atwood novels are The Edible Woman or Cat's Eye, but I'm well aware their experimental feminism and blending of the unrealistic with the everyday appeal to a certain narrow crowd. The Handmaid's Tale or Oryx and Crake would generally have wider appeal.

On the other hand, this sort of brings to mind a book club discussion once had in Edmonton, where one member pointed out that, failing to get his points across in books like Down and Out in Paris and London, George Orwell essentially parades a bunch of farm animals before the reader in Animal Farm, finally entertaining a wider crowd and allowing the political messages he wished to get across to shine through....
Posted by Trish at 06:58 No comments:

Labels: Animal Farm, Cat's Eye, Catch-22, Down and Out in Paris and London, Oryx and Crake, Remains of the Day, The Edible Woman, The Handmaid's Tale 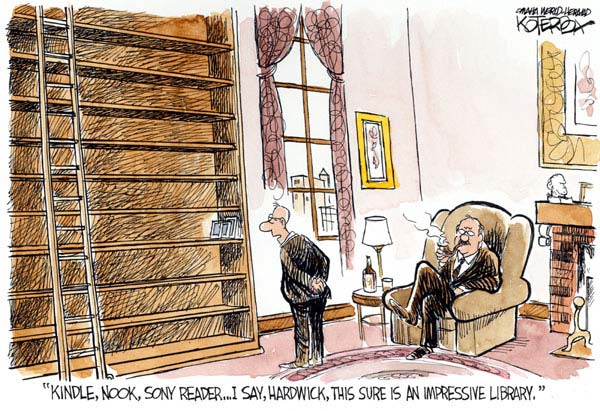 Full disclosure: When I last packed my bags for a RyanAir flight... and by "bags" I mean "bag," and when I mention it's RyanAir, I wish to note specifically that one has to jam their purse into their carry-along and hope for the best while trying desperately to look as though the weight of one's bag is not an issue... I have to admit I kind of wished I had a Kindle rather than four paperbacks stuffed in my bag. I've heard great things about the Kindle -- specifically that it doesn't hurt your eyes, and you don't have to carry around books anymore -- and yet I'm fairly unwilling to dive so headlong into such technology. Won't I miss dog-earing pages? And the tactile enjoyment of turning pages? And, admittedly, the look of a full-to-overflowing bookshelf. Am I right or am I being pretentious and a little silly about emerging technology?

So, having wrapped up posting to another blog -- and finally having had some time to sit down and read! -- I thought it was time to come back here. If you'll have me?

Although done most of my school work for the year, I'm still researching and only now just starting to write bits of my dissertation. But not only do I promise this space will not become a meditation on Barthes's take on mythology or Couldry's position on "effective voice," I promise to try harder to return here more often.

So, time for a round-up of great and not-so-great summer reads!

I bought a paperback coffee of Fey's "memoir" at Stansted Airport last week and, 24 hours later, I had gobbled it up. In between, I laughed while reading in the airport, on an airplane, in my hotel room, and on a beach. I loved this book for its straight-up jokes (erm, straight-up if you watched 30 Rock's first two seasons and loved them, perhaps not so straight-up if you watch, for example, Two and a Half Men or expect people to introduce sarcasm by saying, "Could I be more..."), for teeny tiny insights into Fey's relationship with coworkers like Amy Poehler (I like to imagine they are best friends and have super awesome lunches together), and for huge insights into being a woman in a position of power. From time to time she plays down her power, but mostly she takes full opportunity to give useful and relevant workplace advice. I maybe dog-eared a couple pages to review in future. As "Trees" say, it's "totally worth it."

Not so great: Anatomies of adultery

Sometimes a person needs to read complete and utter brain candy. And so, passing under the Waterloo Bridge a few weeks ago, I bought a cheap (£3.50) copy of Madeleine Wickham's Sleeping Arrangements, originally published in 2001 under the author's name and later republished under the author's more popular nom de plume, Sophie Kinsella. The book is about two families who find themselves in the same vacation rental for a week but -- spoiler alert -- Chloe (the mother from the struggling middle-class family) and Hugh (the father from the thriving-on-paper upper-middle-class family) used to be a couple. Spoiler: They broke up long ago for stupid reasons (Hugh was a douche). Spoiler: Now they're going to cheat on their current spouses. Not a spoiler: Life decisions will have to be made.

I suppose the "moral" of cheating-on-spouses stories is that no one can ever really know what's going on in someone else's head. Hell, one barely knows what's going on in one's own head most of the time, so I suppose there is no point in imagining you understand the inner workings of your husband's or wife's heart or mind. I cannot, however, say this makes books about cheating spouses all that fun to read. Even ambivalence on the part of the cheated-on spouses does not really allow one to side with the cheaters, and certainly if the author goes in with an even hand (no one is married to an evil, overbearing partner, shit just happens) it's pretty hard to sympathize with any character as you read about all the uncomfortable sneaking around. Really, it's an exercise in feeling uncomfortable for other people, which is something I excel at already....

Which brings us to Heart of the Matter, Emily Giffin's last outing. I have to give Wickham credit for, at least, writing a few twists into her tale and certainly making it funny at points. Giffin's anatomy of the cheat, on the other hand, drives forward harshly and without any twists, so that, from the first few pages, you know what will happen, how it will probably go down, and how things will likely end. Ironically, given the novel's title, the book lacks the heart that made Something Borrowed (another book about cheating) fun to read even when you were raising your eyebrows at Rachel's decision to sleep with her best friend's fiance. Despite Giffin's best efforts, one can't help just feeling sad for both Tessa (the wife) and Valerie (the other woman). As to Nick (the husband), he gets to be two different men, depending on whether the chapter is being narrated by Tessa or Val. This does make sense -- obviously the two women will have completely different takes on what he does, what he says, how he says it -- but makes Nick little more than a shadow of a man who one can't imagine fighting for....

Amazing: A Visit from the Goon Squad

Ahem. Sorry about that.

Ok, putting my thoughts together.... Jennifer Egan's A Visit from the Goon Squad is a book about the passage of time. That means you will get to read about the future (slightly dystopic, definitely scary and seriously we all need to drive less, ok?), the past (campfires in Kenya, packed punk clubs in 1970s California, New York in the early 1990s), and the present. Nominally the book circles two main characters -- music producers Sasha and Bennie -- but Egan manages to dot the i's on virtually every character mentioned in connection to Sasha or Bennie. A brief mention of a friend who drowned in university in the first chapter guarantees that friend will have his chance to tell his story later in the book. In this way the book comes across partly as a fantastic vanity project (how wide can Egan cast her net?), partly as short story collection anchored by a handful of characters, and partly as a puzzle that demands a re-read as soon as you're done.

Of David Nicholls's three novels, The Understudy is the only one not made into a movie. This is slightly ironic since I imagine the main character, struggling actor Stephen C. McQueen, would love to be in a movie. Even if that movie was painful to watch and made you cringe, like the book does from time to time.

I've only discovered Nicholls since moving to London, and I think I will forever associate his writing with this city -- terribly funny, uncomfortably truthful, sweetly romantic, and never easy to step away from. Think Nick Hornby, but sweeter and possibly more engaged with his characters. In my humble opinion, The Understudy is not Nicholls's best book (I'd say that title stays with One Day, although there is something so endearing about both Brian and Rebecca in Starter for Ten you have to love them). Nonetheless, there's enough here to read enjoyably, even if you can't help wondering how on earth Nicholls came up with a flimsy character like Nora....

So what are you reading now?

So what are you guys reading now? I'm back on the dissertation train, but in the meantime I'm picking through Zadie Smith's collection of non-fiction essays, entitled Changing My Mind. I have to admit with some embarrassment I've not read Smith's novels -- they don't quite draw me in from the first pages, which is probably something I need to work on -- but I'm digging her writing on writing. At the moment I'm reading her collection of film reviews, which are so pitch-perfect it could make a person cry for wanting to write like her!
Posted by Trish at 02:39 No comments:

Labels: A Visit from the Goon Squad, Bossypants, Changing My Mind, Heart of the Matter, One Day, Sleeping Arrangements, Something Borrowed, The Understudy

I can't wait for this movie -- or the sequel I really really hope is in the works. Because yes, I technically like Something Blue even better than Something Borrowed.... possibly because of the London-based storyline....

Also, I promise to be a better blogger once school is done.... In the meantime, I've barely been keeping up with day-to-day stuff over here.
Posted by Trish at 17:51 2 comments:

a history of navel-gazing

how to escape this blog as quickly as possible